In recent years, workers at companies many of us interact with every day—Amazon, Starbucks, Instacart—have waged high-profile unionization campaigns and stoppages to protest low pay and working conditions. Many are also leaving jobs because of work dissatisfaction and low wages, in what is being dubbed “the Great Resignation.” These and other labor market shifts suggest the need for a new social contract for employment relationships and benefits to ensure all workers—regardless of the work arrangements and jobs they’re in—can thrive in this economy.

Many in today’s shifting labor market are engaged in jobs and work arrangements that put them in positions of vulnerability. Researchers, policymakers, and advocates investigating employment risk and solutions to improve workers’ lives would benefit from examining different dimensions of vulnerability that influence workers’ positions in the labor market, particularly from an intersectional perspective that includes multiple identities.

A deeper understanding of work through a vulnerability framework can help shape policies and practices to mitigate harms and strengthen supports for workers, regardless of their employment status.

I research what I call vulnerable work, which consists of jobs and work arrangements that have any of the following characteristics: low wages, limited health insurance and retirement benefits, lack of predictability, fewer workplace protections, and physical risk. Vulnerability can exist in both traditional and alternative work arrangements—which describe employment relationships—and in contingent work. Workers in traditional arrangements are employed directly by an employer with an expectation of regular hours. People engaged in alternative arrangements work indirectly for a client company through a contract or report to work only as needed, a category that includes independent contractors, contract workers, on-call or day workers, and temporary agency workers.

Contingent workers do not expect their job to last and don’t have an implicit or explicit contract for ongoing employment. It’s possible to be a contingent worker or a part-time worker in either a traditional or alternative work arrangement.

As work evolves because of the COVID-19 pandemic and to account for risk of disease transmission, I have added a category of work characterized by high physical proximity to others (PDF). 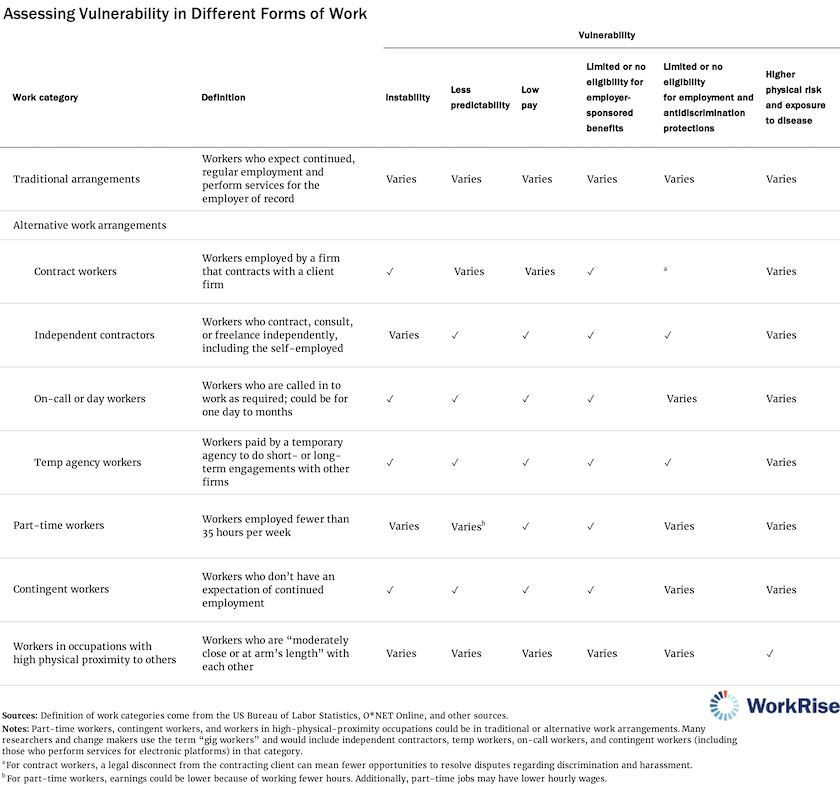 Researchers have demonstrated that that being in an alternative arrangement, such as an independent contract or temporary agency work, increases a person’s likelihood of experiencing some vulnerable work features, such as low wages and benefits. However, job vulnerability also arises in traditional arrangements. More than one-third of traditional workers aren’t offered employer-sponsored retirement benefits (PDF), with Latinx and Black workers having the lowest rates of retirement coverage. And with the solvency of Social Security at risk, workers across all types of arrangements who pay into Social Security are vulnerable.

When measuring vulnerable work, identifying who is susceptible, and making efforts to improve livelihoods for workers in such arrangements, a few factors could lead to improvements:

Disaggregate by race, sex, immigration status, and other identities

Understanding who is susceptible to vulnerable work is necessary so policy solutions can best target those in need. Because data are limited, many researchers analyze workers engaged in alternative and traditional work by race or sex alone, which can mask differences in representation and outcomes in these arrangements among identity groups.

In previous research, my colleagues and I found that after taking education into account, Black and white women and Latinx women and men (PDF) are overrepresented in high-physical-proximity work—putting them at risk for disease exposure—compared with white men. Latinx and Black women are paid the least in these roles.

Disaggregate vulnerability by form of work

When thinking about research on and policy solutions for nontraditional workers, researchers and changemakers should examine each type of arrangement separately because some forms of work aren’t as vulnerable as others.

For instance, contract work pays more on average than traditional arrangements, and temporary agency work pays the least. Further disaggregation by race, gender, citizenship status, and other characteristics would provide more insights on the immense diversity within each category. Many contract workers in service industries, such as housekeeping and food service, earn low wages, but others, such as workers in the tech industry, are paid significantly more.

Workplace conditions and worker benefits warrant examination too. However, the main source for nontraditional work arrangements data—the Contingent Worker Survey conducted by the US Bureau of Labor Statistics and US Census Bureau—has small samples and limited opportunities for understanding differences within each work category.

It’s important to understand when some workers have a preference—or disinclination—for work arrangements that involve some vulnerability and to examine these inclinations by race sex, and household arrangement.

What is especially concerning is when workers are in vulnerable types of work but do not prefer these arrangements. My analysis shows that two-thirds of workers in contingent arrangements prefer a permanent job. Eighty percent of Black men and 74 percent of Black women in temporary jobs want something permanent, significantly more than white men (61 percent) and white women (60 percent).

In some instances, preferences for vulnerable work varies by race, gender, and marital status. In terms of work hours, white married women are the most likely to be voluntarily employed part time, followed by white single women who were never married, likely owing to their higher household and intergenerational income and wealth (PDF). Black women working part time are much less likely to prefer fewer hours, even when they are married, because they tend to have lower household income and wealth due to systemic racism.

Generally, most independent contractors prefer to work for themselves (PDF). My analysis of Contingent Worker Survey data does not reveal significant differences in this preference among Black women (92 percent), Black men (89 percent), white women (92 percent), and white men (92 percent). Workers may decide to make trade-offs and choose more autonomy over the opportunity to have benefits. There may be other push-and-pull factors not currently captured in datasets that motivate self-employment, and these factors may vary by identity group. For example, for Black women and Black men, discrimination in the traditional labor market could drive self-employment.

Recent unionization efforts and calls for universal benefits and a federal jobs guarantee are examples of responses to combat the proliferation of worker vulnerability. There is a great need for more data on worker vulnerability—including disaggregation by racial or gender identity, citizenship status, form of work, and preferences. Researchers and policymakers investigating these phenomena, and designing solutions would benefit from more data and disaggregation as we define a new social contract for US residents.