In the initial aftermath of the COVID pandemic, low-wage workers’ wages were growing

The sharp employment recovery from the pandemic has led to a tight labor market in which there are more jobs available than people available to take them. This, in turn, has contributed to wage gains, as employers, particularly those in low-wage industries, have had to compete to recruit and retain workers. When unemployment is low, workers have more power to negotiate pay, and high vacancy and quit rates are one of the best predictors of wage gains across sectors.

When nominal wages increase, workers see a straightforward pay raise. When real wages increase, wages rise higher than the rate of inflation, and workers can afford more with the money they earn. In other words, real wages take inflation into account. Looking at the topline data from the Bureau of Labor Statistics, it appears workers in the lowest wage quintile have experienced a slight uptick in their real wages since the start the pandemic, suggesting many workers can afford more now than they could two years ago—despite high inflation.

The data indicate that, at certain points during the recovery, low-wage workers actually saw a greater increase in their real wages than many higher earners—bucking the trend of the past 40 years. So far, so good. Unfortunately, this might not be the most accurate representation of reality. 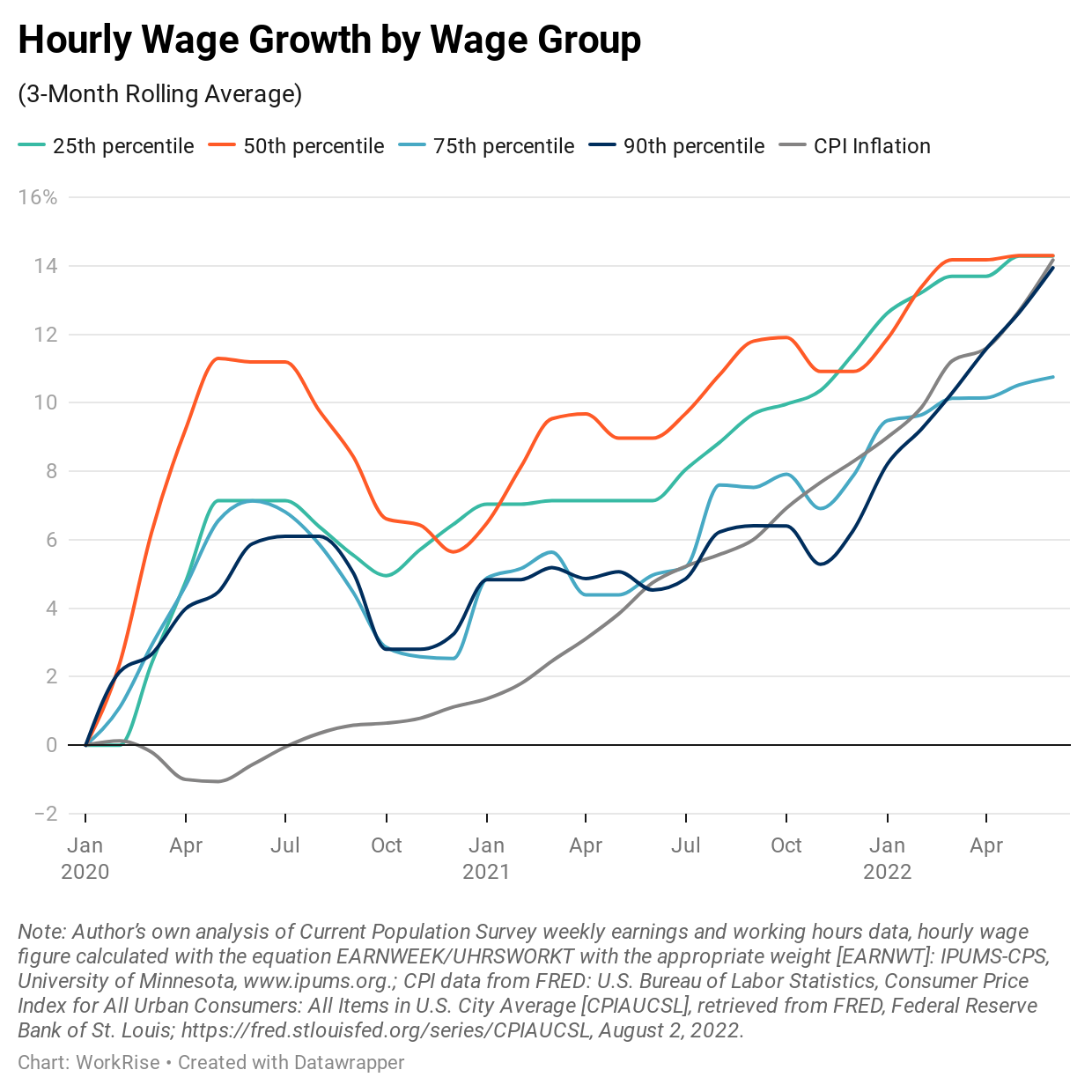 Although the data show low-wage workers’ wages have increased, the reality may have more to do with how the composition of the workforce changed during the pandemic. As low-wage workers (usually those unable to conduct remote work) left the workforce but higher-wage workers remained, the median wage of US workers increased. The new median wage doesn’t account for those who are collecting unemployment or who may have left the labor force entirely.

This “composition bias” might explain why wage data show greater increases in median wages than many workers are experiencing in their paycheck. Because there are more higher-wage earners in the workforce now, it’s hard to get a sense of whether median wages have risen or fallen. Some research indicates that real wages for many workers are down since the start of the pandemic, largely because of rising prices.

Starting in 2021, inflation has risen and eroded the purchasing power of those wage gains

The magnitude of real wage gains is disputable, but the fact that real wages have struggled to keep up with inflation is not, no matter how one looks at it. Prices have increased by 15.0 percent since the start of the pandemic, 9.1 percent in the past year (PDF) alone. As the graph above shows, wages have struggled to keep up. Even where the wage gains might have looked healthy for most of the recovery, they’ve been eroded by inflation since late 2021. In June, inflation came very close to surpassing wage gains since January 2020 for low-wage workers. Every indication suggests inflation will bypass this threshold in the coming months. Looking at the whole pandemic period, most low-wage workers are facing a real-terms pay cut for the first time.

These trends make the low-wage workforce—and the disproportionately Black, brown, and female workers who comprise it—most at risk (PDF) of struggling to make ends meet. Because of different spending patterns across racial and ethnic groups, inflation is subjecting Black and Latinx workers to a greater financial burden than white Americans. Not only is the inflationary burden for Black people higher, but prices for Black people have become more volatile over this period, making financial planning and economic security harder.

The challenge for policy: Reigning in inflation without harming low-wage workers

Policy has already moved to curb inflation, but many of these actions, such as interest rate hikes by the Federal Reserve, are also likely to weaken the economy by slowing down consumer demand and hiring. Hiring gains during the recovery have narrowed racial unemployment gaps. Attempts to tame inflation would likely reverse the wage and employment gains by Black and Latinx workers by cooling employer demand for workers.

Remedies to curb inflation also require an understanding of its root causes. One line of economic thought attributes rising inflation to rising wages. The argument is, if workers are given higher wages, companies will need to raise their prices to cover these extra costs. When prices rise, workers will ask for another pay increase and the cycle starts all over again, creating a wage-price spiral (PDF).

When workers ask for a nominal pay increase (an increase in their earnings) this doesn’t guarantee they will also see a real pay increase. Workers might end up being able to afford less, even if their nominal wage has increased. Using historical data, some have argued that high rates of nominal wage growth are associated with lower rates of real wage growth for this very reason. If this is the case, reining in inflation would require policymakers to control wage growth.

But the central supportive argument that higher wages lead to inflation rests on the assumption that workers can successfully extract concessions from their employer. Yet 2022 is not 1971, when a wage-price spiral occurred in part because more workers were unionized and organized to demand higher wages. Diminished US labor power means many workers are unlikely to elicit rapid and repeated wage increases that would trigger a wage-price spiral. Similarly, fewer workers than ever are covered under collective bargaining agreements, so the chance of workers organizing such to demand higher wages and trigger a wage-price spiral is remote.

As the graph below shows, prices have increased more than wages for workers across all wage levels for the best part of the past year, which doesn’t support the theory that wage increases have propelled the recent bout of inflation. 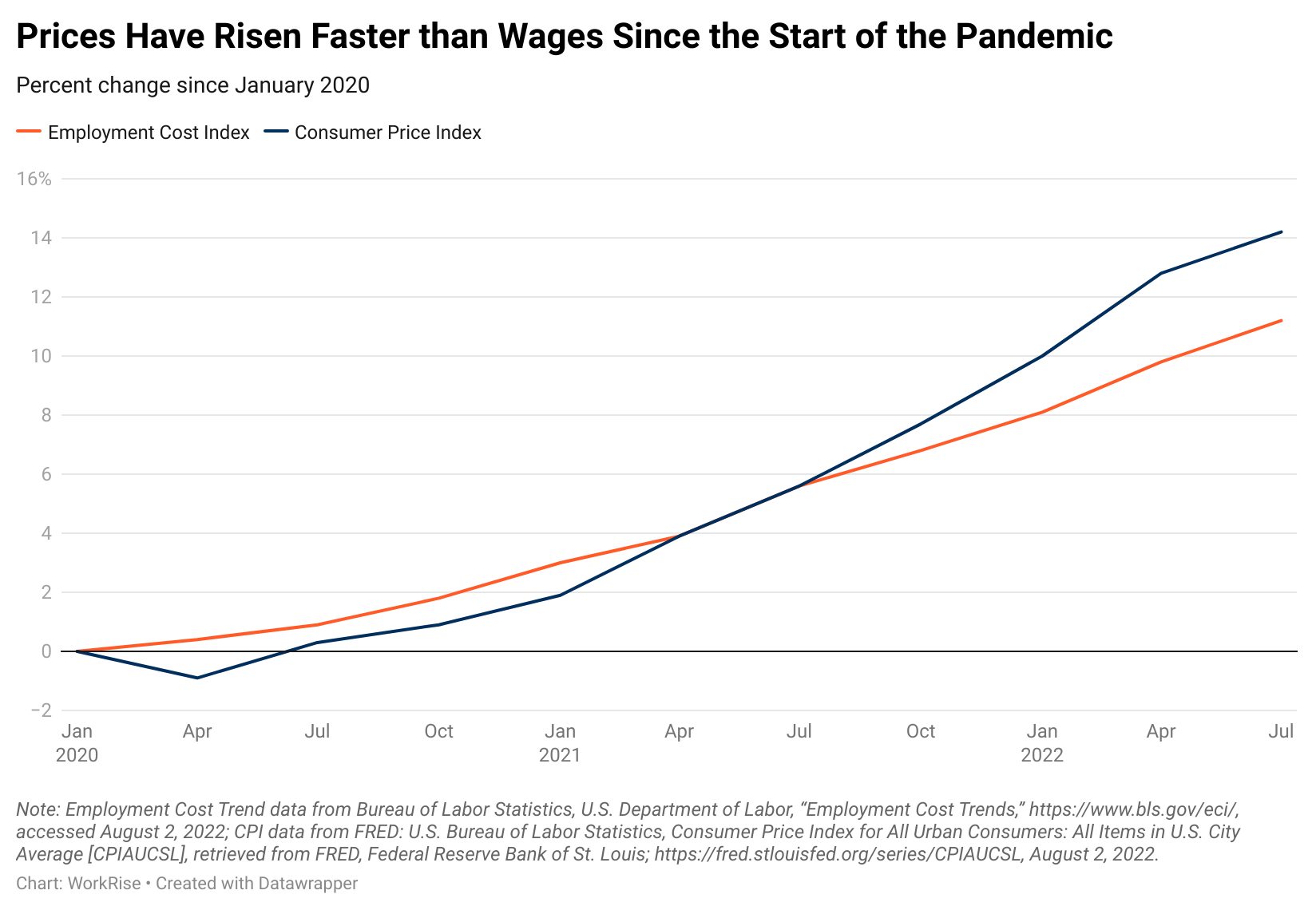 There are other important sources of pressure on prices right now. Some recent research helps explain why higher wages may not be contributing to higher prices. Since the onset of the pandemic, labor costs have accounted for only 8 percent of growth in prices in the nonfinancial corporate sector. On the other hand, corporate profits account for roughly 54 percent.

Other factors are likely contributors to rising prices: the war in Ukraine and the pressure on energy markets, and the lingering effect of COVID-19 on labor and supply chains. The recent Creating Helpful Incentives for Producing Semiconductors legislation should help spur domestic production and job growth, providing relief to supply chains and quality jobs to workers. The Inflation Reduction Act could lower energy costs and other pocketbook expenses for families, including lower health care premiums and prescription drug prices.

In the short term, however, low-wage workers need immediate relief from higher prices. This could come in the form of making permanent the child tax credit, shoring up food assistance programs, expanding take-up and eligibility of the earned income tax credit, offering subsidies and incentives for public transportation, and providing rental assistance to help families manage rising housing costs.

The legend for the second chart was missing in an earlier version of this post (corrected 8/15/22).